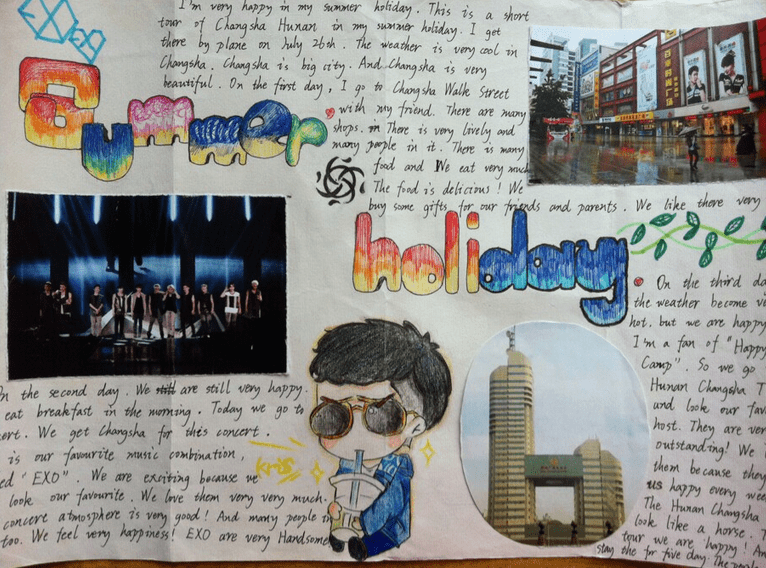 The summer holiday is coming. I’m going to have a good rest and learn to relax myself. I will read more useful books because reading more books is not only interesting but also helps me learn more knowledge. I will try to spend more time in chatting with my parents and help them to do some housework. I am going to take part in the social activities so that I can know more about the society. If possible, I’d like to make a trip to Xiamen. I’m sure I’ll have an interesting and meaningful summer holiday. I am looking forward to it.

One of my favorite teachers at Southeast Missouri State University in Cape Girardeau was known of his droll(滑稽的) sense of humor. Explaining his ground rules to one freshman class, he said, "Now I know my lectures can often be dry and boring, so I don't mind if you look at your watches during class. I do, however, object to your pounding them on the desk to make sure they're still running."

a drop in the bucket

Li Ling was a great general during the time of emperor Han Wu-di (hàn wǔ dì汉武帝). He was a very good fighter, and he won every battle.

One time, however, Li Ling's troops were so hopelessly outnumbered by the Huns that alt="快乐暑假"hough they fought bravely, the whole army was soon taken captive.

Li Ling shamefully surrendered for the moment, planning to wait for an opportunity to strike back.

But when news of the surrender reached the capital, the emperor's jealous ministers began todegrade Li Ling in front of the emperor.

What he heard made the emperor so angry that he had Li Ling's wife and mother put to death.

Ze-ma Chian, who had always respected Li Ling, believed that he wouldn't surrender without a reason, and urged the emperor not to believe rumors.

This time, the emperor grew angry at Sz-ma Chian, and locking him up, punished him severely.

Sz-ma Chian then wrote a long letter to a friend, saying, "I am now in the middle of writing a history book. If I die, it will be as if one ox in a group on nine were to lose a single hair. I am willing to withstand punishment in order to complete this book." Sz-ma Chian finally did finish his book - the very famous Shr-Ji.

It was a cold winter day, a cold wind blowing through the bare branches of the road. The wind was howling, and it was spooky.

I was just after school from the cram school and my mother brought me a case of eggs when I came home. Mom, with the help of her colleagues, carried the box of heavy eggs into the electric car.

It was a windy day, and people were having trouble walking on the road, not to mention driving an electric car, not to mention two people and a carton of eggs. When the car came to a fork in the road, the box of eggs in the car didn't stand the test of the strong wind, and the eggs rolled down. Fortunately, it wasn't bad.

My mother and I hurried to get out of the car to pick up the eggs, but the egg was picked up and rolled, and I thought to myself, "when can we get it?" Even if it's finished, how can you bring a box of heavy eggs home?

Suddenly I came to a big truck, and I cried anxiously, "what to do, the bus is coming, and the eggs don't want any more!"

To my surprise, the big truck "cheep" came to a screeching halt. Come down an aunt, say: "eldest sister, so late how still carry so many eggs?" Then the three men began to pick up the eggs.

The crowd picked up the wood and the flames were high. After a few moments, they were finished. My mother and I were grateful to the aunt, who helped her to carry the eggs up to the electric car. Looking at the back of auntie, I feel that as long as everyone gives a little love, the world will be beautiful.